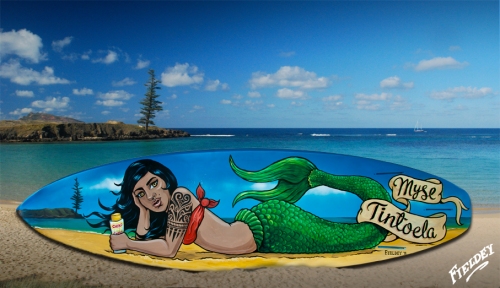 I’m very proud to present to you: Myse Tintoela (My Sweetheart.)

I’m terribly proud of this for a few reasons, one of which was that I had to gird my loins and face my fear of landscapes head on. The result was a fairly true to life rendition of Emily Bay, Norfolk Island, with Lone Pine there in the background. It’s amazing what a little spray paint sky and clouds coupled with acrylic ocean/sand/pine will accomplish. If I were to toot my own horn, I would say that the background adds a little bit of dimension to the board.

The second reason I’m pleased as punch is that this is my first *commission* (if you can call a board for my parents Fish and Chip shop such a lofty title…) It was interesting having to paint for someone else rather than to express my own diseased imaginings, I had to create an artwork with some relevance to both Norfolk Island (being where the shop is) and Fish and Chips. Initially, she was going to be eating a piece of battered fish in a sort of semi-cannibalistic tableaux, but I figured that it would end up looking like a small strange yellow cloud which would raise more questions than it answered. Instead, I settled on the iconic Chiko Roll. If you’re from anywhere other than Australia, you might not know what this is; picture a giant spring roll, generously filled with gelatinous cabbage and small black specks, encased in a cast-iron boiler plate of leathery pastry. It’s a bit like eating a deep fried wetsuit filled with glue. It’s quite an experience, you really must come over and try one…

As for the Norfolk side of things, well, Emily Bay is just the poster-child for the island, a lovely coral encrusted, shark-free number, surrounded by Norfolk Pines and Georgian ruins. Idyllic no?

The name Myse Tintoela is a Norf’k name meaning My Sweetheart. Yes, Norfolk Island, a territory of Australia, has it’s own language called Norf’k. For the keen linguists amongst us you can learn more about it here.

For anyone on Norfolk, or planning a visit there, drop by Ocean Blue Fish and Chip shop up in Middlegate, and check her out! Also, dad makes the best battered Trumpy (Sweet Lip Emperor to anyone not from Norfolk) caught locally! 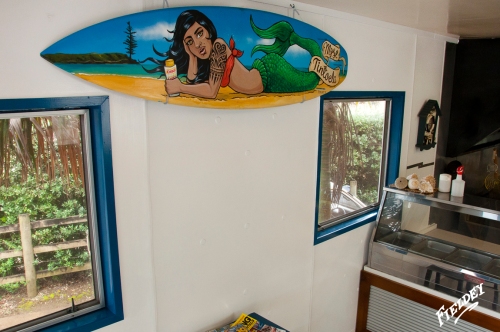 2 responses to “Myse Tintoela… or still-life with Chiko Roll”