I recently got the chance to bring together two of my favourite things: Clark Gable and Spam on a wall on the iconic Learoyd St deli in Mount Lawley, Perth. 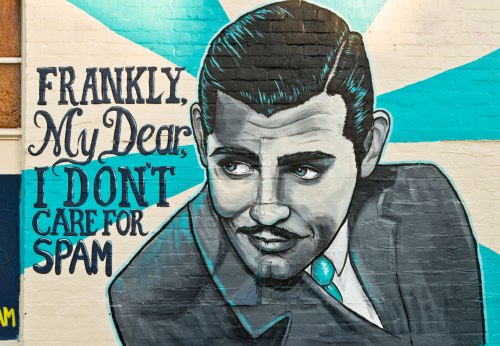 It was a project that was done on a budget with some serious time constraints… in the middle of summer. There was some damn early mornings spent at that wall feverishly painting before the sun came up and started frying me and my paint, but I’m actually really stoked with the result.

The old deli wall was covered in a bunch of advertising and posters, so I decided to work with what I had and create a fake anti-spam ad in the middle of it all.

If you’re interested in having a Fieldey wall mural of your very own, head over to my website and fill in the enquiry form and let’s make it happen!

Vulgar wall mural of the stars!

A nice little time-lapse of me painting my first wall, filmed by the dudes at ArtLab!

The painting took two days and in that time I got some delightfully disgusted looks from passers by as it began to take shape.

The joy of painting brains and maggots

Russell Ord is a big-wave surf photographer from Margaret River. He’s known for charging monstrous waves with camera in hand and gets in deeper than all the other lightweights to capture awesome images like this:

I met up with Russell a few weeks ago and he offered me his surf helmet for a good dose of custom painting. I had a blast painting it, and got to paint my first brain and maggots combo… which was a strangely satisfying and fun thing to do.

The helmet went from this: 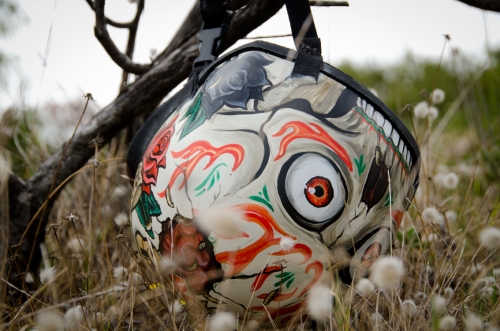 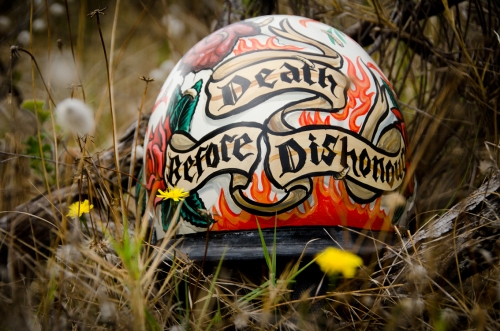 Big thanks for Matt Fieldes Photography for the awesome photos of the finished helmet.

Fieldey’s Freakshow – a tale of trials and tribulations

So… it’s been a while between blogs, but by gad do I have a good excuse! Whilst I was busy holidaying around on Norfolk Island in early January, I received an email from the crew at OnWilliam with an intriguing proposition – to be the first artist to create a Street Snaps photo booth for the Laneway Night Markets that coincide with the awesome Fringe World Festival at the end of Jan. 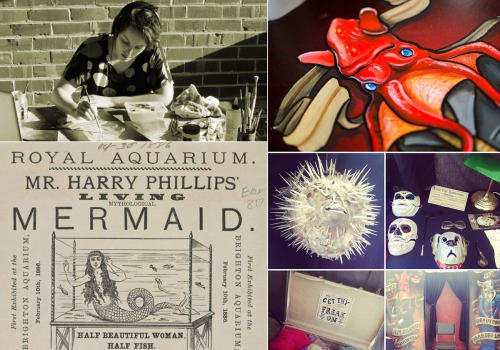 The booth was going to be 3m x 3m which sounded reasonable to someone with no spacial awareness like myself. It was only when I got back to Perth and marked it out in my living room that I realised just how big that really is. This was to be the biggest thing I’d ever created and what followed is a long (Ok, two week long) tale of trials, tribulations and derring-do.

I had to come up with a concept for the booth and then basically set it like a stage. My idea was to create a sort of rip-off Victorian era freakshow complete with silly dress ups and creepy props. On paper it was easy:

Coming up with the concept and the plan was simple, but figuring out what to paint ON was a different story; most papers and canvas didn’t come in big enough sizes. My first brainwave was to paint on 3m x 2m painter’s drop sheets. So I went to the hardware store and bought about nine square meters of the stuff and convinced Mr Fieldey to help me paint an undercoat layer on them on a 37ºC day in the middle of our driveway… Tempers were frayed and a crap-ton of white paint was spilt over our rental house driveway and I realised the weave of the fabric was too coarse and WHOSE GREAT IDEA WAS THIS ANYWAY?

The next big brainwave was to paint on vinyl banners, which came in the right size and had a nice and smooth texture for painting on.  I spent a day and a half painting a giant squid man on one of them, brushed my hands off in satisfaction, only to have the paint start to peel and flake in the evening. And I had one week, ONE WEEK to finish these things! Moral to that story kids: Do your research first before painting on strange surfaces.

After that failed, I did the only thing a human being could do and that was freak out, pull myself together and start again from scratch. I decided to paint the banners at a scaled down size and then have them printed at full size. This worked – it only took half as long, and the artwork at normal size looked very schmick, though with my current run of luck I was expecting them to print lime green or completely fuzzy. 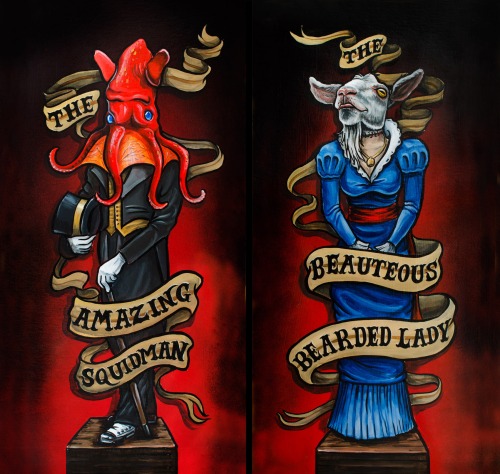 At the eleventh hour I decided to use Mr Flaky vinyl banner numero uno as a sign for the outside of the booth. I painted a cool typographical message  saying: “Fieley’s Freaks”. It took me at least 3 hours to realise I’d spelt my bloody name wrong. I should point out that spelling things wrong happens to me with alarming regularity. What followed was more swearing, cursing and re-painting.

Amazingly enough, by 10am on Saturday morning it had all come together, the banners were picked up from the printers (not as good as the originals mind, but not too bad), I had a swag of silly costumes, hats and día de los muertos masks and had run around picking up tables, chairs and an antique suitcase from 3 different people around Perth. So I got by with a little (ie. LOT OF) help from my friends; borrowing props, costumes, gaffa tape and C-stands to hang the banners off and generally running around like a headless chook.

Mr Fieldey and I spent 3 hours on a very hot Saturday morning putting the booth together at the markets. I had no idea wether it would work, or if people would use it. But when we came back later at night to pack everything away… people were lining up to go in and have their photos taken! Total stoke! They had to turn people away because the markets were closing. I was so chuffed to see people in there, being silly and hamming it up in the costumes and leaving with a smile on their faces. 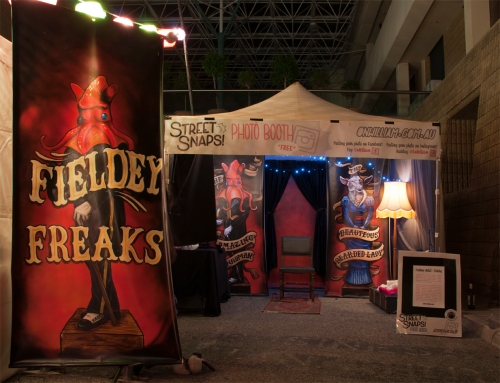 Here’s some photos of people getting freaky in the photobooth: 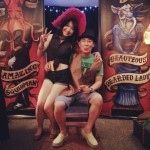 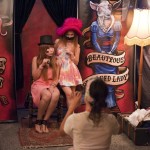 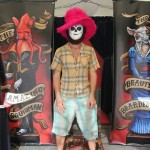 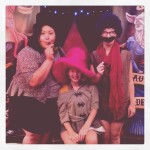 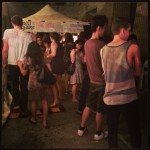 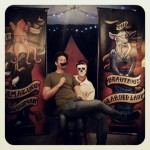 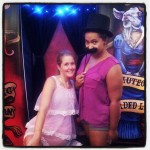 Rocking on with Rock Candy Magazine

Well, well, well… what do we have here? Fieldey in a magazine is what we have here! Can you feel the stratospheric levels of stoke from where you are?

My good mate Ara Jansen interviewed me for Rock Candy Magazine a few months ago, and along with an awesome photo by Matt Fieldes Photography here’s the finished result –  you can read it online: http://issuu.com/rockcandymagazine/docs/rc_03 I’m right at the back on pages 102 – 103.

Interview with Fieldey in Rock Candy Magazine – click to enlarge

It’s been a wild and stressful few weeks here featuring all the fun of overseas family emergencies, funerals and expired passports. To take a breather and immerse myself back into normality I’m taking some time to reflect on life’s quieter and more sublime moments and offering these photographs my brother took on a recent winter evening surf at Trigg Beach.

I think that these shots that I’ve picked best evoke the peace of being out on a the water, and the humble pleasure you can take in just even sitting on your board and watching the dumpers pass by. Sometimes surfing’s not all about bombing monster waves, but about reclaiming the time and space to meditate on life and come back down to earth.

I hope you enjoy them, you can click to make them bigger and you can check out more of Matt’s work, including gnarly barrel shots on Facebook – facebook.com/MattFieldesPhotography, he’s pretty damn talented! 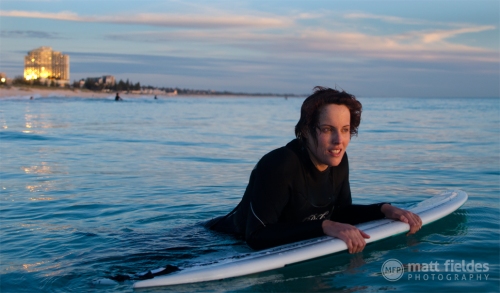 For your Friday viewing pleasure I’d like to show you some brilliant photos that I’m digging from Coops at Loaded Barrel.

I met Coops at the Telstra Drug Aware Margaret River Pro last weekend, and as it turns out, he’s a top bloke who takes some amazing photos and has a camera lens that I’m coveting big time.

Most of the photos shown below were taken here in Western Australia, and my number one favourite is the eagle ray photo which won a Bronze award at the International Loupe Awards 2011.

We can now spend the rest of Friday dreaming about where we’d rather be… Enjoy! 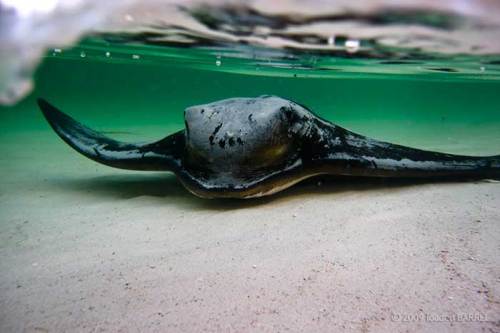 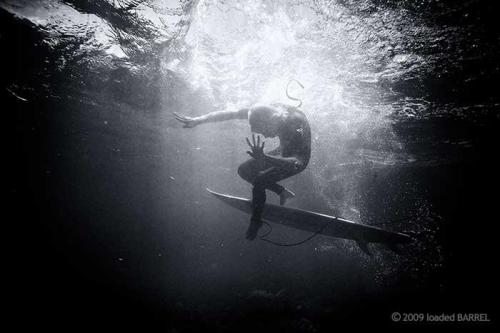 Cool eh? You can check out more of Coop’s stuff on Facebook here.